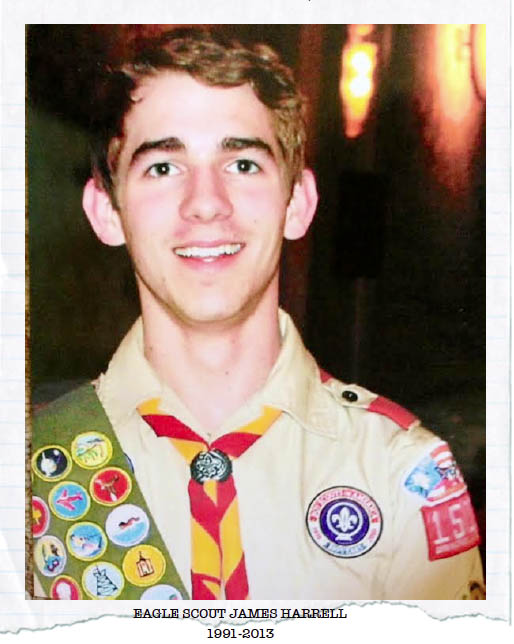 We lost a great former Troop 15 Scout in 2013, and we want to use this place as a reminder of how much he meant to us.  Below are thoughts from our Scoutmaster.

“Do your best.” I have thought about this phrase daily since James Harrell’s funeral. James did his best to live life to the fullest. His mind racing at a hundred miles a minute parallelled his fast walking pace. I can still see those short strides with a hearty smile on his face, challenging me to the point that complacency was a stranger.

During James’ funeral, his older brother Robert stood in front of hundreds of people, saddened, lonely, heartbroken, and struggling to find comforting words. yet through such a traumatic experience he knew there was hope and comfort with other people in the congregation that believed as he did. Unexpectedly, Robert asked all Scouts to stand and say the Scout Oath. I was breathtaken and speechless: through the oath, I could not say one word of the oath. As older scouts mature and and move on, you hope that Scouts remains a part of their life to come. Robert had been away from scouts several years and I am so privileged to know how deep it still was in his heart.

I have thought of that day — and of James — every day since then and I know that James had a purpose. Through him many doors will be opened. James reached for the sun during the day and the stars at night. His Scout spirit was vibrant and prolific and since that day I
realize how important it is in my life to “do my best.”
–Carl Miller